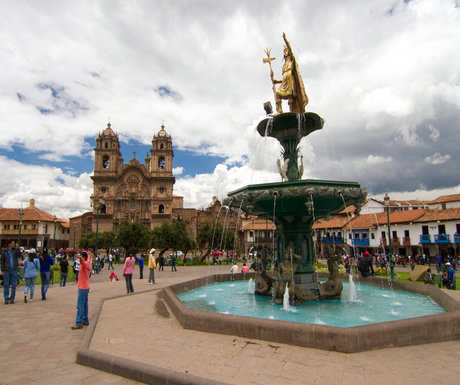 In Cusco, Peru you can choose from a luxurious selections of hotels that incorporate the dramatic history of the area. All of these hotels have retained the patina of a bygone era, but come with modern appliances and amenities. Original stonework, period furniture, and antique paintings belie these hotels old souls.

In the 16th century Spanish conquistadors arrived in the Inca city of Cusco and tore down the palaces and temples, repurposing the Inca walls for their new buildings. These hotels were built in the Spanish tradition, with rooms that face a central, open-air courtyard. The terraces have archways that overlook the courtyards, which are characterized by stone fountains and neatly landscaped beds of flowers.

All of these hotels are walking distance from Cuscos main square, the Plaza de Armas. This square is the centerpiece of historic Cusco, and where youll find the Cusco Cathedral, which is the citys most impressive example of Baroque architecture.

This mansion was built in 1560, and has its original stone façade. The owners have decorated the inside of the hotel with colonial-era paintings and sculptures. Over the years it has served as a home for several Cusco luminaries, including famed Peruvian author Clorinda Matto de Turner, who lived in the house during the 20th century. 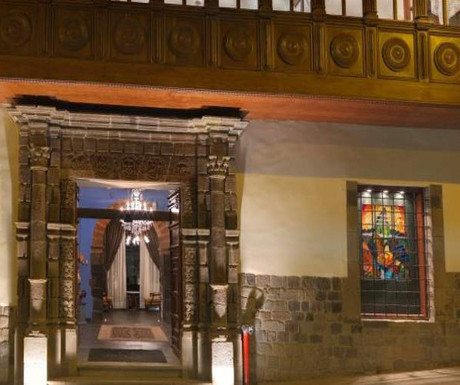 After they conquered the Inca, the Spanish began importing artists from Europe to give art lessons to Peruvian natives. This led to a school of art known as the Escuela Cusqueña (Cusco School). Cusqueña artists painted Catholic religious scenes  Inca and other native Peruvians were forced to give up their traditional religions. Aranwa Cusco Boutique Hotel has a collection of 37 paintings and 35 sculptures from this era. 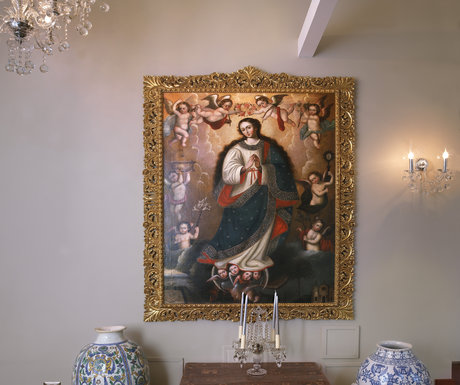 Besides the art on the walls, you will see incredible artistic detail in the fountain in the courtyard, the stonework around the fireplaces, and in the rare antique furniture. 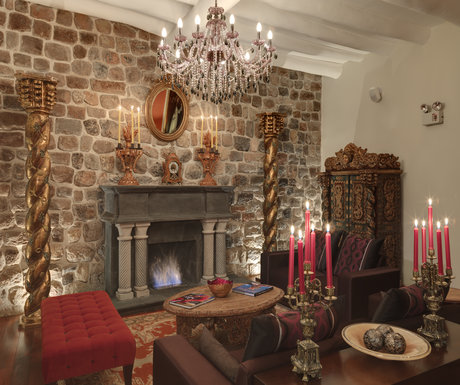 Cusco is at a high elevation, so the hotels renovations include a system that pumps oxygen into the rooms, which helps guests avoid altitude sickness. Bathrooms have heated floors and spacious tubs.

Aranwa Boutique Hotels restaurant serves Perus trendiest cuisine  a type of reimagined Andean cooking called Novoandina. You can expect lots of potatoes, rich sauces made with ají amarillo (a type of Peruvian pepper), and other ingredients rarely seen outside of Peru.

Inkaterra La Casona is a restored 16th century colonial manor house. This hotel faces the Plaza de las Nazarenas. Look around and youll see huge doors, candelabras, and Andean textiles. It has 11 suites, and it is one of the oldest Spanish buildings in Cusco. 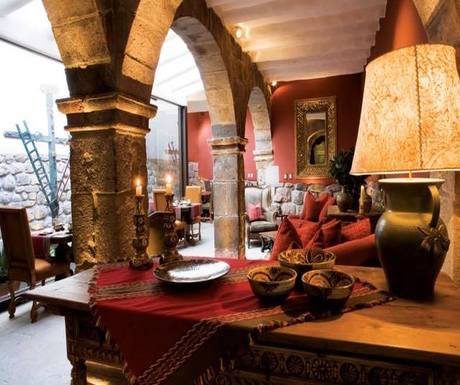 This hotel has an impressive list of previous owners. Juan Alvara Maldonado, one of the discoverers of the Amazon, called this place home, as did Diego de Almagro, a conquistador that came to Spain along with Francisco Pizarro. General Simon Bolivar lived in the house in 1825  his influence sparked revolutions throughout South America, and many South American countries consider him a great liberator.

The award-winning interior designer Denise Koechlin has made the hotel echo its opulent past. Each room has an open fireplace, and the staff can kindle it for you. Modern appliances are hidden in small wooden cabinets to keep the atmosphere intact.

There is no sign on the hotels front door, and only guests can enter this storied domain. In the restaurant they serve upscale Andean cuisine. They also serve coca tea to help with altitude sickness, and you can request extra oxygen.

This hotel has gone through many updates. It started out as an Inca building, but in 1644 was taken over by Jesuits. In the 18th century it served as a high-class convent for nuns that came from aristocratic families. Palacio Nazarenas continued to serve as a convent until the 1970s.

Today it has been restored with modern amenities, but you can still see the original Inca walls included in the hotels design. This is a great example of the transitional style in Peru  the name given to Spanish buildings made with Inca stonework. 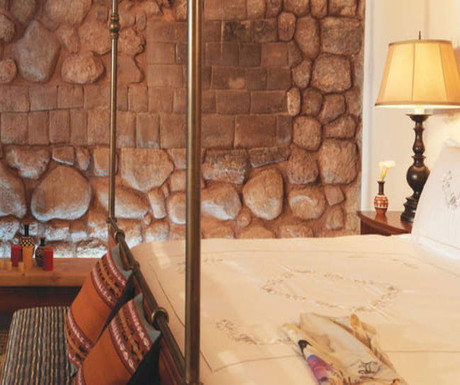 One of the most well known previous owners is named Mancio Serra de Leguizamón, a conquistador and a notorious gambler. He claimed have gambled away a gold sun crafted by the Inca to represent the god Qorikancha. But in addition to being a gambler, Leguizamón was also known for telling tall tales, and it is unlikely he ever owned such an object.

This house has seen its fair share of drama. In the mid-16th century, a greedy conquistador named Francisco de Carvajal had the then-owner of the house, Doña María Calderón, murdered. After a few other owners died without paying their mortgages, the Jesuits acquired the house.
In the 18th century Nazarene nuns came from nearby San Blas to make a new home in the former palace. You can see the traces of the later colonial era in the 18th-century mural depicting bullfights, today on display in the patio of the lobby.

There is a spa with oxygenated rooms for massages and other treatments. In some parts of the spa you can see Inca stones through glass panels in the floor. Visit the heated outdoor pool with a neighboring bar. Overlooking the pool youll find a yoga studio. In addition to yoga classes the studio offers qigong, Pilates, and meditation instruction.

The hotels Senzo restaurant focuses on local, seasonal food. Although this has become a trend in high-end dining, this type of traditional cooking has never left the Andes.

All of the 55 suites are air conditioned and oxygenated. There is an outdoor, heated swimming pool. During your stay youll have the added convenience of a 24-hour butler service. Lavish bathrooms have fixtures made from Peruvian marble.

As the name Monasterio suggests, this building originally served as a monastery. It was built in 1595, on the ruins of an Inca palace. It was originally known as the San Antonio Abad, and served as a seminary. To this day the Belmond Hotel Monasterio houses a collection of original, colonial-era art, and there are rich tapestries and 16th-century paintings still hanging on the wall. 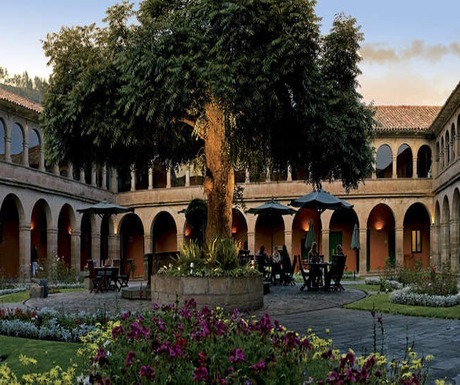 In 1650 a strong earthquake hit Cusco, and destroyed much of the original monastery. Afterward the Cusco Monsignor had the monastery restored, and added a gold chapel to the original layout. This part of the hotel property is still consecrated ground. It has gold, baroque-era design and examples of works from the Cusqueña school of art.

This building served a seminary until the 1960s. Eventually the local monsignor had the building restored once again, this time to attract visitors.

Because it served as a monastery, the guest rooms are on the smaller side  monks had no need for spacious interiors. These spaces have Wi-Fi, and all of the rooms come with complimentary butler service. You can also have request that a masseuse come to your room for a convenient massage.

Hotel Monasterios El Tupay Restaurant serves international dishes, reinterpreted through local ingredients. In this elegant dining room you can expect an especially upscale atmosphere, with opera performances three nights per week. For al fresco meals visit the hotels Illariy restaurants, where you can have breakfast or lunch in one of the cloisters that overlooks the courtyard.